And even then, it nearly killed me.

I don’t mean that it was dangerous or wracked with mishap that could have severed my head or anything. I mean I hated doing it so much, I could have died.

I literally could have died. Literally. Not figuratively, like a spiritual death. I mean laid down on the floor and just stopped breathing – that is how over DIY projects I am these days.

(I did burn my finger on my glue gun, so maybe it was a little dangerous too.)

I think I’ve really evolved over time. First I hated Pinterest and all this perfect Mommy -DIYs everything crap. Then I felt guilt for that, or guilt for something, and went all Pinterest Mom crazy. Like everything was over the top DIY and perfect with all its perfection. Now I’m back to hating it, but mostly because I’m lazy and just over doing things.

So my devolving to this slovenly lard ass who would rather just buy something online than have to actually go and burn my fingers off with my glue gun again…it has been a slow one. It’s gone piece by piece, so that no one will ever notice that I went from DIYing everything to DIYing nothing. My theory is that the change will have been so slow that it will be hard to even remember that this wasn’t the way things were all along.

This Easter, I am officially down to the end game. The goal of DIYing absolutely nothing is within reach. In this – the final phase – I did but one DIY project.

And if I was going to be totally honest about it, I’d admit that the only reason I did it was to save money.

We gift all of the kids in my husband’s side of the family every major holiday. That’s Christmas and mini-Christmas, aka Easter. (Just kidding, we don’t consider it to be mini-Christmas, although I do find that a lot of people have turned it into that…)

Now at eight kids besides our own, this is starting to add up. And especially with holidays like Easter, it’s always the wrapping that makes the expense out of control. The baskets, the extra large eggs…whatever I wrap the Easter goods in for these kids, it always ends up being a hefty chunk of the overall cost.

So I made my own bags this year. Out of burlap. Burlap and buttons and some leftover chalkboard tags I had from something else. 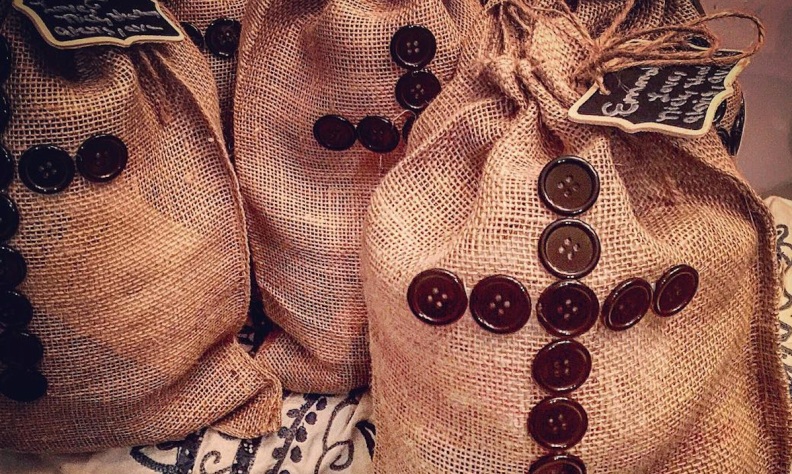 I hated every minute of it too, so I hope those kids realize how much effort went in to even convincing myself to make the bags to save the money. It hadn’t even occurred to me that I could give the gifts in CVS and Trader Joes bags – those kids would probably never notice.

This raised a bigger issue, though, in my mind: how has it come to this? How has it come to the point where I hate doing DIY projects so badly that I would prefer to lay down and cease to exist? What happened to that Heather that just a few years ago would hand-paint the wrapping paper, and cut party cheese into shapes that went along with the party theme?

It’s possible that I burned myself out, as I do in so many other areas of life. But it’s also, and more likely to be the case, just a sign of this new era of parenting I am in – the my kids don’t want shit to do with me anymore phase. The themed parties aren’t really what they do anymore, now it’s all cellphones and God mom why do you have to embarrass us. So I may as well just stop caring about some of this dumb DIY stuff that doesn’t do anything but cost me frustration and heartache, and – apparently – embarrass them.

(Newsflash: everything embarrasses them.)

There’s also the distinct possibility that I am just on a Pinterest hiatus. That it’s only a matter of time before I am back in the saddle and DIYing everything to the point that other mothers hate me for all that I do.

I’ve written about this many times before, and I am most certain that I will write about it again. But just one DIY project this Easter. Not twelve. Not twenty. Not even two…just…one… I can’t help but think that is a sign of a much different and terrifying time to come.

For if I am no longer a Pinterest Mom, well then what kind of a mom have I become?

One Reply to “I Did One DIY Project For Easter. One. Not Twelve. Not Twenty. Just One.”