Sometimes I get the impression that my friends that are moms are not really my mom friends. I don’t know if that makes any sense, but people I have known and called friends for years don’t seem to really identify with me as a mother. We don’t really talk about our kids with each other. And I’m not entirely sure we see eye to eye on a lot of stuff.

Maybe it’s because many of them are just starting to have kids and I’m an old pro at this point.

Maybe it’s because I talk about things other than my baby’s shitty diapers or my kid’s constant wetting of the bed. Sometimes I talk about books I’ve read or movies I’ve seen; or even articles I’ve written.

Maybe it’s because I’m an asshole.

I’d bet money it’s the latter. Whatever the case may be, as some of their kids grow older; and as my interactions with the world go beyond people I have known forever into the realm of mom bloggers and others in book clubs and different community groups I am a part of, I’m crossing people with older kids and different experiences that are using a word so glaringly annoying I just want to talk about it and make a motion that we abolish it.

It isn’t just that it’s annoying and inspires panic within me, either. It’s that it sounds stupid, obsessive, and even a little pedantic.

Supposedly, the term is meant to describe a child that is sort of in the in-between. Getting ready to go through puberty; but still playing with Barbies and LEGOs. Not yet a teenager, but starting to act like one. Overemotional, slamming doors, and already using the word ‘like’ way more often than necessary; and yet still snuggling at night before bed.

It’s a confusing time, no doubt. I myself remember the complexities of being 10, 11, and 12. I remember still playing with Barbies and dolls. I remember continuing to play dress up with friends, and I also remember slamming the door emotionally on more than one occasion. Your feet start to get bigger, little boys’ voices start changing. It’s all starting to happen. And it sucks. It’s as if these people – the proponents of the term ‘tween’ – have forgotten how already upsetting childhood and change can be, without having a label attached to it. Have we not already learned our lesson about labeling our children?

As innocent or cute as it may seem, I feel that it’s degrading and embarrassing. Tween. It sounds vaguely familiar to teeny or weeny, and quite frankly a lot of the kids that I hear described as tweens look to fit both of those descriptions. I can just picture a mother calling her son a tween loudly as she drops him off for school only for him to get beaten up by a bully over the fact that his mother just highlighted his emotional insecurities and pending, already humiliating, puberty for the entire world.

Not only that, but nine times out of the ten a day that I hear or read people refer to their children as these teeny-weeny in-betweens, it’s actually meant to talk about themselves. And with Elizabeth’s 10th birthday, suddenly I have a tween! Where did the time go – oh she’s a tween, next a teen then college! OMG someone poor me a martini I have a tween, oh dear God I’m getting old!!!

Just as your child is not an extension or accomplishment of you, but rather an individual in and of him or herself; your child’s pending puberty and teenage years are not, and never will be, a statement about you or your age.

Finally – and perhaps most importantly – I think this incessant labeling of our kids who still just want to be … wait for it … CHILDREN … as ‘tweens’ is just another example of how we are forcing our kids to grow up way quicker than they should. It’s obsessive to place a label on a period of time that is no more different than the two or three years that preceded it. It’s pedantic to be so technical and have to place a name to imply or inform the world that boobs are about to sprout and little balls are about to drop. I have a ten year old and she is no more ready to be a ‘tween’ or a teenager than she was when she was six. She still plays with Barbies, watches Berenstain Bears, snuggles at night, calls me Mommy and thinks boys are gross. When a family member told me he thought she had a crush on a family friend I laughed and said “what, because she’s polite?” – and this was not out of denial, but rather an absolute knowledge of my daughter that makes me confident in the fact that she still doesn’t give boys the time of day, and that’s completely OK because there is absolutely no reason for her to. She doesn’t have a Smartphone or an email address or her own iPad or a Facebook profile – and she will not be receiving any of those any time in the foreseeable future. And there is nothing wrong with any of that. By contrast, what I do think is wrong is to encourage our kids to grow way too fast and embrace these ‘tweeny’-‘teeny’-‘adulty’ things and situations that children should be in no rush to embrace.

What I hope my friends that are moms, and mom friends (if I have any, which I don’t think I do), consider is the enormous impact something as dumb as a title like ‘tween’ can have. And, that rather than teaching our kids to label and to grow up so quickly, and to feel more awkward than they already do – we teach them to stop giving a shit about all of this and to just feel comfortable being who they are, changing as they do naturally, and feeling absolutely no shame for any of it. 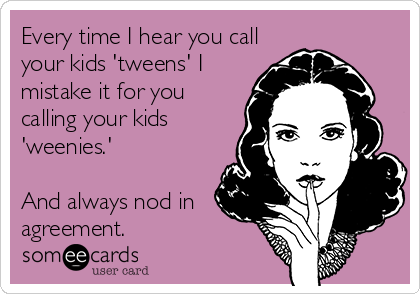 … SO ANGRY THAT I HAVE TO SCREAM IN CAPITAL LETTERS OVER THE INTERNET!

Whew! That made me feel better.

Now back to topic:

It’s the new year. 2014. Yippity frackin’ do. I’m so excited to see all the people join gyms and post their run keeper status updates on Facebook. I can’t wait to hear at the Super Bowl party about how my friends cut out carbs or how my family isn’t doing fruit anymore, or about how you just started a cleanse and have to sit uber-close to the bathroom (you know who you are).

I am just dying to hear about how fat you all are as you pinch a very small amount of skin on your arms. I am so excited to listen to you all go on and on and on about how out of shape and logy you have been, as I shovel chips and fat-filled dip and you talk about this being your new mission in life while I sloth away right next to you.

Because believe you me: no matter how much of a fat ass you think your size is, it will not change a single thing about how I feel about mine. Even after you start telling me about all the different diets you think I should go on.

I can’t wait. For all of this.

Even in just a few days, it is becoming intolerable.

What I’m trying to say here is that with the new year, we – as usual – are seeing an influx of people trying to get skinny. New year, new you and all that nonsense. By “we” I of course can only speak for myself, but I am assuming that unless you are one of these asstastic-I-have-big-time-body-and-self-confidence-issues-idiots, then you are experiencing this too.

What is so frustrating about it all is this:

Healthiness is in. I dig it. I love being healthy and eating salads and taking walks and exercising with Richard Simons and making lean meats for dinner instead of burgers. And getting a full night of sleep. And taking my folic acid every morning and my eight glasses of water every day. And being able to walk up the stairs in my house without having to take a break. It’s wonderful!

What is not wonderful is the underside of it all. The darkness that believes that the path to healthiness is to ridicule the fat away.

I can’t stand hearing or seeing people fat shame. It is awful to see my family put their already-anoxeric dogs on a diet (I’m looking at you, sister in law). Horrified is how I feel when people idolize Jennifer Lawrence, and call her a hero, because she referred to herself as “chubby on screen.” Let us end this Lawrence obsession once and for all: that trick is not chubby. She is doing nothing but making chubby people feel like 400-ton bison that will one day need to be removed from their homes by Jerry Springer and a crane.

And I’m telling you right now: the next skinny person I see on Facebook calling themselves “a pig,” “fat,” or “ugly” is getting the big, fat delete (pun intended).

This is not how we want to be presenting ourselves, people – as hating our selves and the ways that we are. Come on already. Even if that is not what you are trying to convey when you use this language in these terribly damaging and toxic ways, it is exactly what you are conveying; and not just to me, but to others.

Most importantly, to children.

If you want to change your life, change your life. Stop talking about it and do it. Stop making excuses about why you want to do it, and just do it. The rest of us will be angry at you and your weight loss campaign much less if you just be a little less self-deprecating, and a whole lot more inspiring. 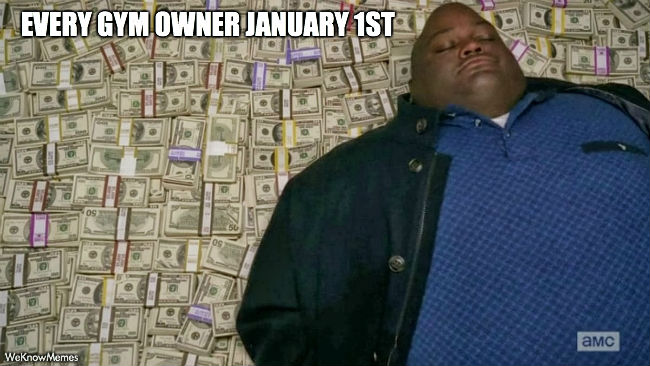