I took down our Christmas decorations on Christmas Day.

I’m not even kidding, you guys. I did. Even before the grandparents were out the door, after watching the kids open an ungodly amount of gifts, I was taking shit down.

I’ve just had it with the clutter and the dust and, well, the holiday.

But as the weeks wore on, things started to irritate me. The baby was constantly spreading the ornaments around the house, so every night I had to traipse around and find them all, put them back, then start all over the next day. Also, as we drove around looking at other people’s outdoor lights, I realized how uncoordinated and – I don’t know – sloppy ours were.

And then there was that whole fire thing that happened in the weeks that led up to Christmas.

One night, about three weeks ago, my daughter and I were on our way home from the gym and we noticed there was a glare from an apparent fire, still quite a way’s away. Two hours later our power was cut. Our entire county had been cut because the fire was rapidly spreading towards the ocean, and had hit some transformers along the way.

By 11 that night, my mother was on her way to our house, having been evacuated from her apartment. By midnight, several of our friends had been evacuated, many of whom tragically lost their homes in the subsequent days that followed. 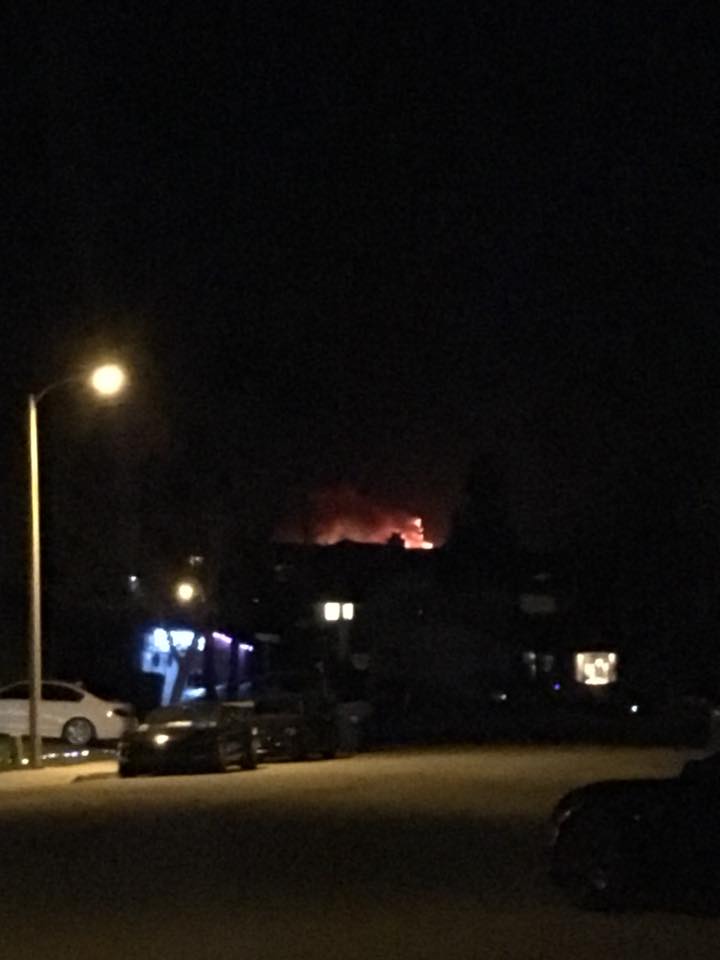 For two weeks, the fires consumed our lives. You may have heard of them – the Thomas Fire, the Skirball Fire… just two of the several that popped up around southern California and ravaged our communities like no fire has ever ravaged them before.

So while all of this was happening, there was no Christmas preparation going on, or holiday activities, because everything was closed. You could see the fires coming over the hills from our window, we were constantly wondering if we should pack things to be ready to evacuate ourselves. (Our town in particular was, fortunately, spared.)

Then there was the air quality that followed; which continues to be on and off now – even though the fires have pushed up to the north. People were stuck in their homes, the city hall and libraries were handing out free respirator masks for people to wear at all times. At times the smoke was so thick you couldn’t see very far at all; the majority of the schools essentially closed for Christmas break two weeks early.

Except no one could do anything but stay inside. 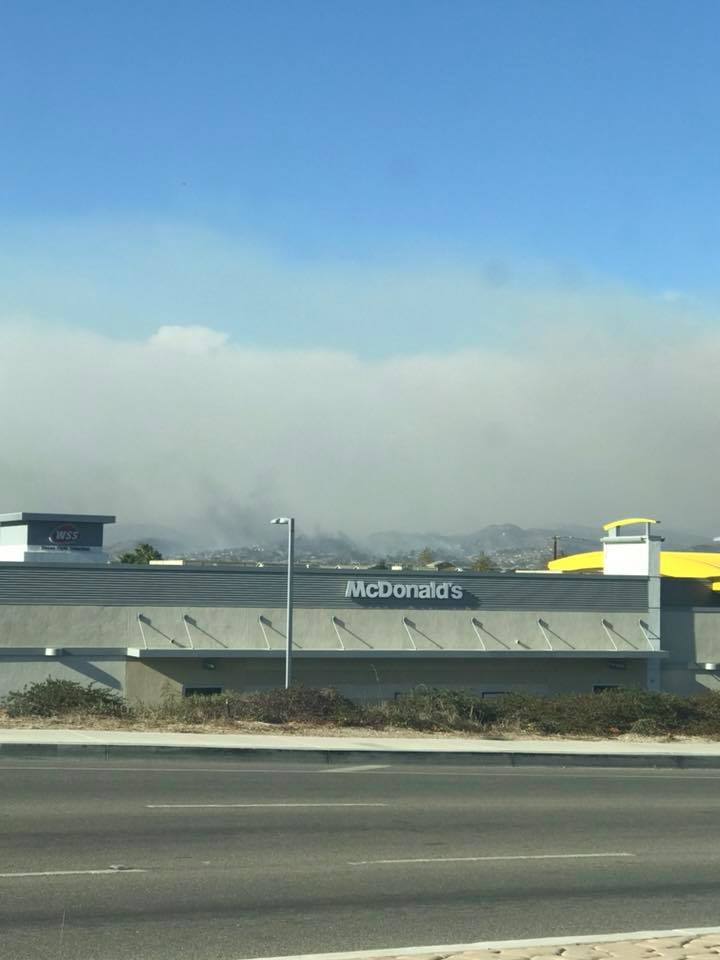 What this all did to my house was leave a thick layer of dust and ash all over my beautiful Christmas decorations. By Christmas morning, I was just ready for it to be cleaned up.

So I took that shit down on Christmas Day.

While other people were sipping hot cocoa by the fire and helping their kids set up new toys, I was furiously packing up my Christmas music box collection, putting away the ornaments and trees, and dusting and vacuuming.

It didn’t just feel freeing from the ash and soot of those fires that seemed to cover everything in my house, including my beautiful decorations.

It felt freeing from the extensive list of social functions I had to put on a face and wear regular clothes to. The potlucks where everyone wore red, because everyone looks like shit in green; and the work parties where the entire Human Resource department lets loose after one too many cocktails, busting into a grind session on the dance floor in front of the CEO of the company (that. actually. happened. at. my. husband’s. work. party. you. guys. no shits.)

And it felt freeing from the worry that there was someone I forgot to gift to, or a vendor I forgot to tip.

Did you guys know you are supposed to tip your cleaning lady an entire week’s wages for Christmas? You’re also supposed to tip the newspaper guy, the gardener, the mailman, give gifts to all the people that do your hair and your nails; you’re supposed to leave out a bin of snacks and drinks for the UPS and the Fedex guys for the entire month of December too.

I gave my cleaning ladies each an extra $20 and a tin of cookies, and the gardeners got cookies as well (they smoke pot before they get here, so I’m pretty sure they enjoyed those more anyway). But the guy who ruins my newspaper every day, or the lady who delivers my mail opened up and damaged …they weren’t getting anything.

And a bin of snacks and drinks for the UPS and Fedex guys? Fuck that noise.

I think this is all really why I am over Christmas. And, in part, why I took down my decorations so quickly.

Taking them down was not only moving on from the tragedy and difficulty of the fires that had befallen my community in the weeks before the holiday; it was a big middle finger to the obligations and expectations I find myself presented with every year, and yet am finding harder and harder to continue engaging in.

After all, it’s about the meaning of Christmas. I’m pretty sure it doesn’t say anything about exact tip amounts or fucking bins of snacks for service employees that are already getting paid. Neither is it about getting shit faced at the work party or dirty dancing in ugly Christmas sweaters.

I’m over Christmas. Are you?

Today when we went on our annual trip to get a photograph with Santa Claus at the mall, I realized that this is the last year we’ll be making such a pilgrimage.

When we got there, I was quickly reminded of last year’s experience where Santa Claus continued to stumble around, making it apparently clear that he was drunk and it was only 11 o’clock. This year, Santa seemed sober, only for Mrs. Claus to take his place at the throne of Mall Drunk. For thirty minutes, we stood in line waiting for our turn and I watched her as she stumbled around, her eyes even rolling once. When in close proximity, the smell of whiskey sour was so overpowering I was legitimately concerned that if she were to belch, the Christmas candle lit next to Santa’s chair would actually ignite the entire mall. At first, I couldn’t really pinpoint why “drunken debauchery” always seems to come of dressing as the fictional couple.

But then I began to look around.

The mall decided that instead of a really big Christmas tree that you get to walk under as you go up to the platform where Santa and Mrs. Claus are waiting, this year they went the more traditional route and installed a nativity scene. It was your standard, run of the mill, life-sized nativity set, only in the place of the baby Jesus was a Macy’s shopping bag.

Really? I thought to myself as we rounded the corner to the last leg of the never-ending line to sit on the fat guy’s lap and be on our way. Yes: really. 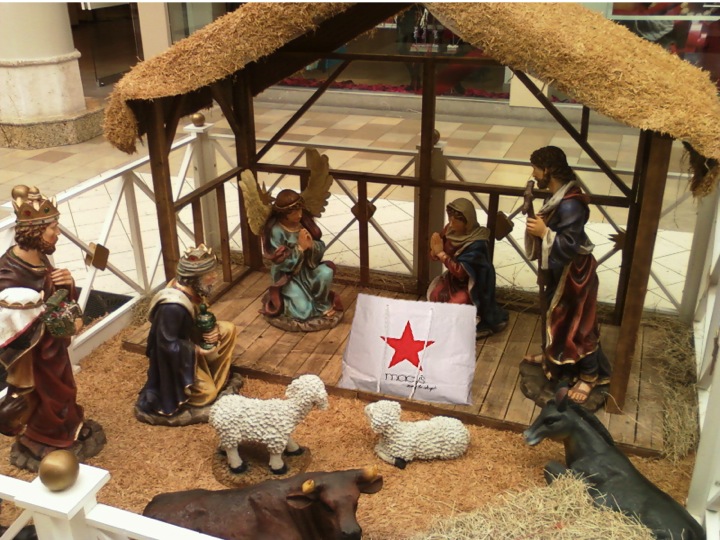 I’m sure Mrs. Claus (and last year – Santa, himself) wasn’t actually drinking because of the sheer consumerism of the Macy’s bag-Jesus nativity set (well, if they are anything like me they might be…).  But beyond that, as I looked around while standing in line to pay $38.95 for five minutes and three photographs, I saw the utter humanity baring itself for all to see – a sight usually only reserved for Disneyland and funerals.

There were people arguing in line about what picture package they were going to get – because they had to make sure to send photographs to every single goddamned relative that expected one. This raises other issues that are beyond the scope of this blog, but as to the bizarre-factor of this situation, one couple actually began to scream at each other. Not talk in raised voices, not yell – actually scream. I was surprised the mall cops didn’t show up (although when have mall cops ever actually policed the mall?).

Further down the line, there was a pregnant woman who looked like she was actually going to give birth right then and there waiting to take her 2 year old son to visit Santa Claus. I don’t know if I have ever seen someone so pregnant before. She kept rubbing her gargantuan belly and moaning – at one point she kneeled and I almost fainted at the thought of her birthing right then and there.

Children were screaming everywhere. Some were wearing their pajamas still (which seemed ludicrous at roughly $13 per 4X6 print – but who am I to judge?). In the time we stood in line, my feet were smashed by some lady’s stroller no less than five times and I set my hand on the banister holding the line together once to learn a child had been gnawing on it (leaving my hand slobbery with some stranger’s spit).

In the end, standing in line for thirty minutes had my own mouth salivating at the thought of drinking heavily upon returning home. If I had to stand there for eight hours a day, pretending to be happy about the most material, consumeristic, and generally fake holiday of the year; all the while wearing an outfit that is hot, itchy, and absolutely ridiculous, and being put in the position of having to allow strange children to stomp on, hit, and kick me for the sake of this grand, holiday charade – I would probably be drinking before work every day too. Actually, I would probably start every day off with a whiskey sour and a handful of Xanax.

This is all nothing new, though this year I realized it was time to bid adieu to the time-honored tradition of visiting the local mall Santa Claus. As much as one may want to be understanding of the alcoholism which plagues the holiday characters each year, it is still an overwhelmingly sad situation (when you really think about it, which I try not to) and sets a horrible example for children. Why this year did I finally draw the line, you ask? Because for a two year old or three year old, or an infant – you don’t notice. Santa just has “bad breath” or Mrs. Claus is just tripping. But as we walked away today, (seven year old) Pookie acknowledged that she knew Mrs. Claus was drunk when she loudly pronounced, “…well, at least Santa wasn’t the drunk one this time…”

So drink on, Mr. and Mrs. Claus. Drink on. But we’ll be staying at home next year.