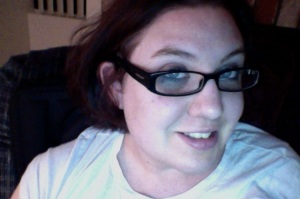 Here I am. It’s Thursday night. I’m in my pajamas. As you see, no make up. I’m just hanging out. I’ve written a lot today – both a blog post, as well done revisions on my new blog book coming out soon. I also went bowling and to the library. Those were pretty good times. I should be spending my night relaxing and reading my new Hem biography with a nice glass or two of skim milk.

But I’m just so fucking excited for this week’s Shut the Fuck Up Fridays that I cannot wait to post it. So I’m writing it early and posting it tonight because it is just that good. At least as it’s worked out in my head.

Have you ever been in a restaurant, only for someone to be talking so fucking loud that you just want to break a glass and cut the motherfucker to get him to shut the hell up? It’s not always men – that’s sort of sexist for me to say “him.” In fact, more often than not, it’s been the broads.

Once we were out to eat and these three humungous women (I don’t mean their physical girth … well, they were a little heavy, but I mean like Amazon Women – tall, muscular, and quite frankly frightening); these women were loudly rambling on about their new marriages, the inadequacies of their husbands, and how nice it would be if they didn’t have to get porked every night. In the middle of the goddamned restaurant! In front of children! I will never forget as they pounded out of the restaurant, little Pookies clung to me in fear then asked what they were talking about. I really appreciated that.

Today’s experience was no different. We were picking up take-out salads and this old guy was shouting – literally shouting – to the person sitting right across from him. MY NEW NUMBER IS 7-9-5-4-4-3-7 … NO!! 7!!! 7!!!!” Then he kept going on and on about how his grandkid was in soccer and his son was getting a promotion and his fantasy football club was meeting up again and blaa blaa blaa blaa blaa, in the highest decibel possible. In the five minutes I waited for our food, I learned more about this guy’s life than I have ever wanted to know about another human being, a complete stranger no less.

Walking out, I was so overwhelmed by the Restaurant Loudtalker that I immediately turned into this crying lady who has the balls I don’t have to say what’s making me cry:

The other day I was talking about how my Trailer Trash Mom started texting and it is – like – seizure-inducing to read the things. I’m not talking about texters like her, though. I’m talking about the people that text, Tweet, email, Facebook, Instagram – whateverthefuck social whoring you want to reference – shit that just looks stupid.

Seriously. There are very few acronyms I find to be acceptable alternatives to basic English literacy. OMG is one. WTF is another, with its variants WTS and WTH. B4 and L8 are not; nor is Ta2. H8er just makes me emotional again:

Everyone has been asking what the conclusion of my Terrible Tuesday was the other night. My mother and grandparents came over to dinner; it was such an awful day and I was essentially wasted by 6 o’clock. Before that, though, my mother announced that she was going to bring my grandparents over around 2 or 3, instead of when I invited them to come over, at 7. Being a generous host, I canceled my afternoon plans and made sure to be home by 2.

So I had laid out some appetizers since they’d be there for so many hours before dinner. Just some chips and dip, and some caprese salads. I spilled an enormous amount of chips with dip on my chest, licking every one of them up with no comment from the crowd. Then I served dinner – again, relatively healthy. Nothing too bad and pretty low cal.

To be precise, I served some garlic bread, nonfat tortellinis with fat free feta, bar-be-qued sirloin (even though I don’t eat red meat), and a medley of vegetables (brocollini, asparagus, and snap peas). My mother – having just returned from her couple of months at the trailer with her hillbilly husband – was not used to eating such an healthy meal. It’s all Ramen, chili dogs, and McDonalds for those two, so her gut was a little ill-prepared for such an easily digested and nutritious meal.

As everyone sat and let their food digest before taking a piece of red velvet cake for dessert, my mother suddenly leaned forward and scooted to the edge of the couch. She spread her legs and positioned her hands on her knees, then puffed out her chest and let out the most uproarious and earth-shattering belch I have ever heard another human being let out.

My grandparents sort of sat there as if nothing was going on, although my grandfather did verbalize what she had just done by saying belch, like he normally does when he does it.

To make matters worse, when she was done letting out the gut-busting, time-stopping esophageal foulness, she wiped her mouth, giggled and said “I guess I’m ready for dessert.”

While everyone else ate their dessert – acting as though not a goddamned thing had happened – I snuck to the bathroom and sat there, tears leaking from my eyes at the horrifying display my mother had just turned the evening into. Maybe it was the wine. Maybe it was my Trailer Trash Mom’s gut rot. No one will ever know, but in the end it was all emotional and teary and STFU: