My husband and I, we are lifetime renters. We love the perks of renting: we don’t have to deal with maintenance problems, we have the security of living under the wing of another entity, and renting in Southern California is – without a doubt – cheaper than owning. In the volatile market out here, the risks of renting as compared to the risks of owning are minimal. These are all facts.

What is also a fact, though, is that when you rent you live in constant fear that your rent is going to be raised come lease time. It doesn’t happen often, in fact my husband and I have only seen it happen once before when we lived in an apartment complex owned by a big, brand-name company. Otherwise, our rent has never been raised, unless of course it was because we moved up to a nicer community with more amenities. Which has happened a few times, but that doesn’t change the fact that it was of our own doing.

So in May of last year, we moved to what we thought would be at least a semi-permanent place. It has by far been the nicest place we have lived. Nice area. Gated community. Plenty of room. Quiet neighbors. Clean pool. The only complaint we’ve had has been that the parking situation is a little tenuous, but even so we’ve been really happy. Comfortable.

As our lease renewal has drawn near, I thought for sure they would raise our rents. It seemed a given – the economy has been rebounding in the last several years, and this is a nice place. But then again, the anxiety has always been quelled by common sense. Reason. Rationality – they can’t raise it that much. Can they? Sure, the economy is rebounding, but not to such a degree that we can’t justify staying here. There are constantly people moving out of there, so they must want to keep some people around…right…?

On Friday of last week, we received our letter in the mail. They were “offering us” another year here – oh how gracious of them – and for only a 16% increase in rent.

Let that digest for a moment.

Initially in shock, because I had never heard of anything so outrageous in my life, I asked around, emailed the company, and posted on Yelp and ApartmentRatings.com. I thought for sure this was a mistake. I mean, really. When we first moved in, the man who owns the other three-bedroom unit on the other side of the complex told me we were getting “ripped off” for what we were paying as compared to him. He is still here, and I included that in my emails and reviews.

I wanted to be reasonable and understanding, and honestly I didn’t want to leave. We like it here, we are very comfortable and happy. But we also live on the incomes of a freelance writer and a film editor who hasn’t seen a decent raise in his wages in as long as we can remember (in fact, we have lost benefits in recent years).

So I waited patiently, started looking around some more. And I figured that if we didn’t hear by the end of this week we’d have to get more serious about finding someplace else. Finally, after not hearing back from anyone, today I went on Yelp to find a response to my review. Here is the candy-assed response they gave me. 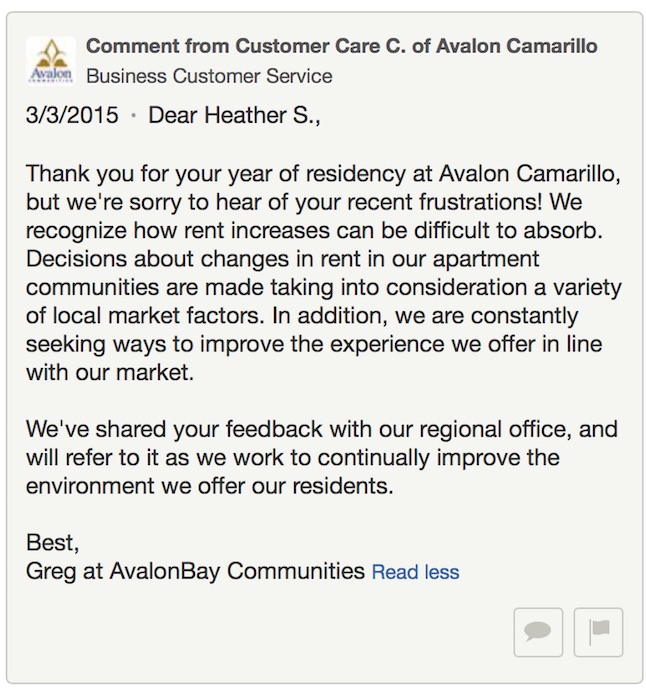 So basically: don’t want to pay our rent increase?? – SEE YA!

Renters forever, we find ourselves with no home.

As the day wore on, the reality of this situation started to really sink in. Not only are we completely unable to pay the increase of rent at our current place, rental rates in the area actually are around the same as we currently pay but there is nothing available – so far – in our time frame. I cannot even wrap my mind around that, let alone how many people I know that rent for cheaper than we do but that are holding on to their good prices for dear life.

It’s starting to sound a lot like New York City. I always knew there was a reason LA and NYC seemed so interchangeable.

We have family that owns property down the street from where we live and rents it out, but they don’t want to offend the person they are already renting to by giving them notice so we can take over the lease.

Let that one sink in a moment too.

So in just eight, short weeks we will have no home. Or a new home, but where or how I have no idea. The other alternatives are equally as terrifying: we move into an hotel until we find a place that is in our price range; or we finally decide that this is time to cut the ties of my husband’s career and move all the way across the country with no home and no jobs to speak of.

Nonetheless, I am left with this more philosophical mind frame of the times in which we live. Where no one is safe or secure. Own a home and the market could crash and you could wind up in foreclosure with nowhere to go. Rent a home and the market could soar and you could wind up on the streets with nowhere to go. No one is safe, the middle class is being squeezed out of existence as far as I can see it.

It’s terrifying, really. We were so comfortable.

Ava, putting that resistance band to good use. 🙄 • • • #tween #kids #momlife #fitness #tennisfitness
New shirts (they hate them)! • • • #dogs #dogsofinstagram #dogfashion #doggie #dogmom #norfolkterrier #maltese #shelterdogs #poundpuppies #rescuedogsofinstagram #dogmom #momlife #meliaandmilyforever
*sensory box update* ...today I grabbed some stuff from the 99c section at Michael’s to revamp my little guy’s sensory play box. I haven’t done this since Halloween, so it was time. It’s a spring theme. Eggs. Unicorns. Pastel toys and dinosaurs. Sorting boxes. And his box and sensory play tools are cleaned and ready for the season. • • • #toddler #sensory #sensoryplay #homeschool #3yearpreschool #momlife #toddlermom #homeschoolmom #preschool #momofthree #easter #spring #springhassprung
Carl is helping bake cupcakes (actually muffins for breakfast tomorrow). • • • #toddler #momlife #toddlermom #baking #cupcakes #muffins #breakfast #yum
🕷
😻😻😻 • • • #momlife #momofthree #kids #dinnertime
Flowers for myself, and a balloon for my valentine. Except he already released it to the ceiling... • • • #momlife #valentines #happyvalentinesday #toddler #toddlermom
Cooking and baking my way into my children’s hearts, one holiday at a time. • • • #valentinesday #holidays #baking #momlife #momofthree
If you haven’t been to the Seabee Museum in Port Hueneme, you have to check it out. Phenomenal. • • • #usnavy #seabee #history #homeschool #momlife #fieldtripday
😻😻 • • • #momlife #toddlermom #toddler
It’s apparently arts and crafts night over here. Ava is doing an order for a local preschool for slime. Alexis is making herself a t-shirt that says “The Earth is a Globe.” Carl is painting a Valentine’s Day dinosaur craft. • • • #artsandcrafts #crafts #craftnight #kids #momlife
Carl was not expecting this bird to talk back, and then it said hello. • • • #bird #toddler #aviary #cuckatoo #momlife #toddlermom #fieldtrip #homeschool