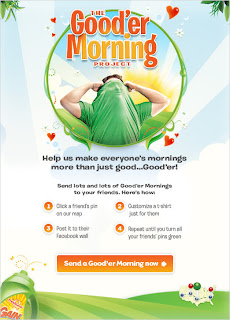 I’d say it’s time for a good old fashioned boycott, wouldn’t you?
This evening, during one of my typical insomniac viewings of Pretty Woman, a commercial came on that left me reeling.  It’s strange, for usually I mute the TV during the commercial breaks, although (losing the remote amongst the pillow-and-blanket fray that surrounded me on the couch) I happened to hear this commercial. 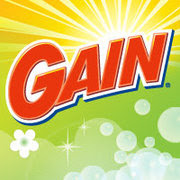 It was a Gain FreshLock commercial, in which the (nonexistent)-word “good’er” was used – not once, but twice.  After about five minutes of ruminating on the atrocity that had just unfolded itself before me, I hopped onto Gain’s Facebook and corporate webpages to post my sheer disdain for such blatantly irresponsible advertising, only to find that others (such as myself) had also gone to question the advertising strategy of the laundry detergent giant.
What kind of a society do we live in that it is considered socially acceptable for such things to be put in broad view of the public?  It’s bad enough that our children have to be exposed to violence, drugs, gangs, and sex without much of our own input on the matter (and I have even chosen to turn a blind eye to advertising schemes that involve switching letters to make it sound cute, such as ‘Krazy Kat’s Kitchen’).  But enough is enough!  We may not be able to control the chaos that goes on in the world, but we most certainly can control the way we teach our children to speak.  Just yesterday, I delved into the issue of common use language when I blogged on the problems of grammar and punctuation that are becoming prevalent in our society.  It is obvious, then, that I would be upset by the use of a term like “good’er” in a large scale, multi-media, advertising strategy – and you should too.
When English teachers report the appearance of LOL and 🙂 in term papers, we (in this country) have a problem much greater than we wish to admit going on in our education and value systems.  We don’t need Gain’s “good’er” campaign making things worse than they already are. 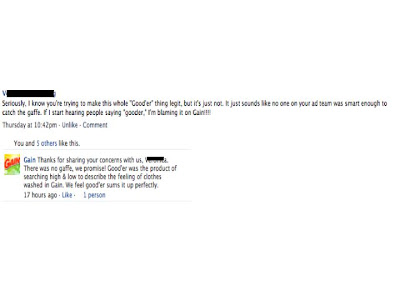 I think the real kicker in the pants on this Gain “Good’er” campaign strategy is that Gain blatantly laughs in the face of anyone who questions the use of such a stupid-sounding, nonexistent word.  As I scrolled down Gain’s Facebook page this evening, I noticed that only once had the site’s administrator actually responded to the concerns of people questioning such a grammar faux pas.  In their response, Gain’s Facebook administrator stated that “Good’er was the product searching high and low to describe the feeling of clothes washed in Gain.  We feel good’er sums it up perfectly.”
So from that we can conclude one of two things:  either (1) Gain makes people feel so good they can’t help but sound completely stupid, or (2) only people with a second grade education use Gain.  Maybe that’s a little harsh, but that seems to be what Gain is implying.
Let’s stop settling for every bit of nonsense that comes down the pipeline of these major corporations.  At the risk of sounding like a crazy, old lady standing on the corner yelling that everything is a matter of corporate conspiracy, I’d like to suggest we hold a boycott on Gain.  It isn’t so much a boycott on the product, though, as it is the message accepting their shoddy advertising sends.  If we don’t stand up now, ten years from now when kids are including the term “good’er” (next to the LOLs and :)s) in their term papers – well, we will only have ourselves to blame.
To tell Gain what you think post a comment on their Facebook page by clicking here or send their corporate office an email by clicking here.  Don’t forget to include that you pledge to not use Gain until they get rid of the Good’er Campaign!