This is a lesson I continue to learn, still, after all these years. I used to think I knew everything about being a parent.

While I went to college, I worked in a pharmacy as a pharmacy technician. After about a year of working, they invented this thing to help kids with the gross taste of medicine called FlavorRX. The idea was that for the low cost of $3, we could add almost any flavor to a kid’s disgusting, puke-flavored liquid, making it easier on the kids when they had to take it. 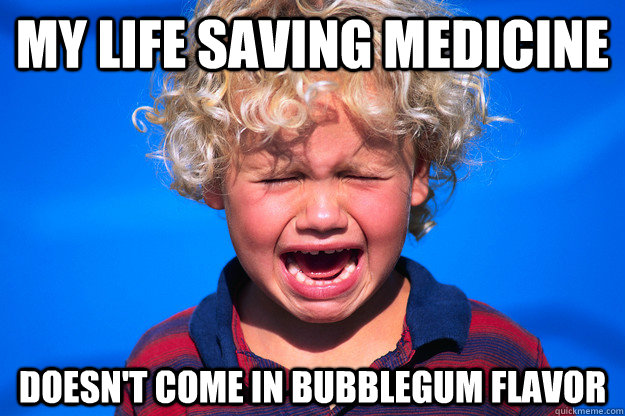 I thought I knew everything about parenting even then, which is funny because the truth was I didn’t know a fucking thing. Every time a parent paid the $3 for the flavoring, I would scoff that they would do something so ludicrous. Didn’t they know what all those $3 expenses could buy them?! When I had kids I would get them to take their medicine by telling them to take their fucking medicine. There would be no arguing about it. They’d deal and in fact they’d like it. I vowed up and down to never – not ever – waste money on frivolities like that.

So today I paid $3 to have my daughter’s medicine flavored grape-bubblegum. This isn’t the first time I’ve done this, either. My kids don’t take antibiotics, or any medicine, that often, so you know they’ve got to be pretty sick if they do. In fact, this particular child has not taken antibiotics in four years; now a kidney infection has made it a necessity. The medicine they gave her was gross, and she has to take it four times a day on an already touchy appetite.

$3 to get her to take the damn medicine and quit the fighting about it was well worth it.

Last year, my brother in law and his wife had a baby. I remember during the pregnancy they were talking about all the things they would and would not be tolerating from their kid. They’d be hard to the line with the rules. The schedules would be enforced from the get-go. And so on and so forth… I remember one day at brunch another parent in the family looked at me and said “they’ll learn…they’ll see.” And I used to think that when people responded to everything I thought I knew about parenting before being a parent like we did, that it was sanctimonious crap.

It wasn’t. It was just true.

I have yet to find out if they have learned the same lesson I have on this one, but I continue to be reminded often that I sounded so much like them before kids. Only to have backtracked on almost every single one of my beliefs and assertions and ideas about being a parent since becoming one.

I had a lot of time to think about this as I stood in the mile-long line at the CVS waiting for my kid’s antibiotics to be flavored like a piece of grape-bubblegum. Because the FlavorRX is just one in a series of things I knew not a single thing about before becoming a parent.

I used to say that my kids would go to bed naturally at a reasonable time, and there would never be fighting about it.

My kids stay up pretty late every night. And most nights they bargain their way into sleeping in the living room.

I used to say that we wouldn’t be those families that spend all their time at theme parks.

We’ve been Disneyland season pass holders for as long as I can remember.

I used to say that I would never be one of those parents that bribes their children with sweets and privileges.

You just don’t know what you’ll do as a parent to make it work until you have to make it work. I used to think I knew everything about being a parent. I was terribly, terribly wrong. But I really believe that this is totally OK. In fact, the only thing that would not be OK would be if I had learned nothing from this.

As I stood in that line and got that $3 FlavorRX, I finally figured out the bigger picture. The lesson is that sometimes things work out differently than you’d expect. Sometimes you have to adapt. Sometimes you have to change your beliefs to adjust to the circumstances. This really makes life better, in all aspects, and we have our kids to thank for teaching us that.