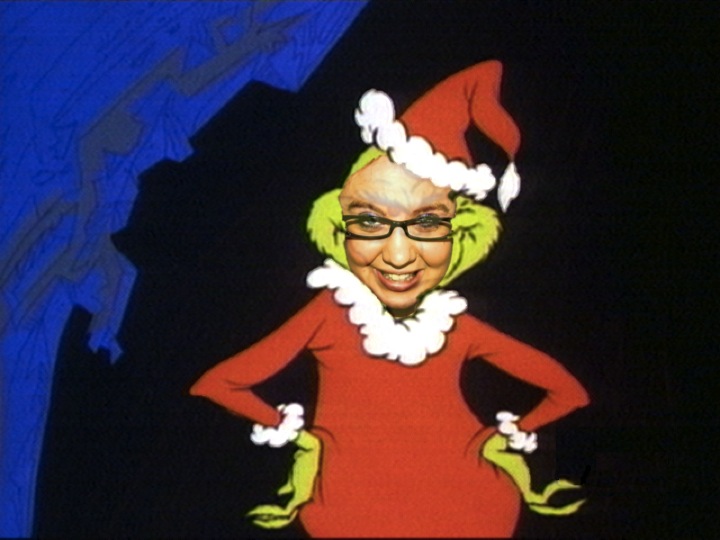 I can be a bit of a negative nelly; although, I prefer to consider myself realistic and just very anachronistic. But in recent years, I have noticed that my vehemence towards the holiday season has gotten considerably more impassioned, more negative you might say – so much so that I have even considered not celebrating them. I feel I have some good reasons though.

#1 Christmas is supposed to be about Jesus, not gifts. Need I remind you all of the Macy’s bag nativity scene from my experience at the mall last week? Nothing disgusts me more than the blatantly materialistic consumerism that has taken over the people in our culture. Maybe it’s just a California thing, but as the years have gone on Christmas has become less about the meaning of Christmas and more about what did you get me?

#2 Christmas is supposed to be about Jesus, not food. I totally get that food is good, and nothing is more fun than getting together with friends or family (or even just your dog) and having a nice meal. But for Christ’s sakes (no pun intended) – Christmas is not not not about eating! Last year I was at the in-law’s for Christmas Eve and by the time we left, I had seen so much food consumed that I (myself) felt ill, despite how abstemious I had been in my portions. For these people, special occasions (and especially Christmas) are all about the food that is going with the day, but this is and never was the meaning of most of the holidays that are being celebrated. It’s disgusting to see how many people in this country gorge themselves on so much food – especially people who may not even really understand what Christmas is supposed to be celebrated for – while others much less fortunate go without. It’s almost sad how easily people forget when their oversized bellies begin to growl.

#3 People are a bunch of ungrateful assholes. Today I received four different emails from Bath and Body Works, Urban Outfitters, and other trendy, bullshit retailers who don’t seem to understand the meaning of “unsubscribe from email list” – all of which contained variations of the same message.

This is such horse shit! I know it’s nothing more than an advertising technique, but why is it that people returning crappy gifts they are totally ungrateful for has become a cutesy cliche? People are such ungrateful jerks! If you hate the gifts others give you, chances are they feel the same way about the Hello Kitty toaster or tasteless sweater that you get them every year – so why not save the ungratefulness and make a donation to a needy charity instead?

Oh … I know why. Because people are even more ungrateful when you give donations in lieu of a gift. This year we gave gift baskets to everyone with wine and a donation card that had been made to a local literacy foundation. A couple of the people we sent these to, though, actually complained – actually complained to us – that they had sent us a list of things they wanted. Jerks.

#4 Family events are stressful. I’m sure a lot of my faithful blog followers love spending time with their overwhelmingly large families at the holidays; I, myself, am even cooking for my grandparents and parents this year. But pretending like family events are always a walk in the park is just about as childish as thinking that rainbows really come from the assholes of unicorns.Families are great, but they are also not – which oftentimes makes family events stressful. If you are anything like me, your family events usually come laced with gossip, drama, too much alcohol, more gossip, more drama, gossip’s transcendent partner, shit talking, and people waffling between judging others and pitying them. I’ve said this before: there is a reason there are so many jokes about how much bull shit family events can be. Because for the majority of people out there, they are.

#5 Most modern Christmas movies make me want to gouge my eyes out so I never have to see them again. Home Alone was awesome. Charlie Brown Christmas will always be one of my favorites. A Year Without a Santa Claus is an awesome work of nostalgia and art. But Santa Buddies? Barbie Nutcracker? Arthur Christmas? And if it isn’t these terrible children’s Christmas movies, it’s Lifetime, ABC Family, and Hallmark shoving bull shit Christmas wish movies down everybody’s throats. And I know I’m going to be in the minority on this one, but The Christmas Story on repeat for 24 hours on TBS every year is annoying. The movie isn’t even that good.

So I’m jaded and snarky, and I hate everything – okay? It should come as no surprise, then, that this B(itch)’s a Grinch. I’m sure if you counted the number of times I used the term “bull shit” in this post, you would be concerned by my excessively foul mouth. In the end, I really do believe that “bull shit” is exactly what Christmas is – not because of what it is supposed to be, but because of what it has become. But if you really got down to it on my reasons, I think you’d have to admit that I’m right…

As for me, alongside being a Grinch, I also don’t believe in scarring children for life because of my own idiosyncratic beliefs. So I’ll be playing the game on Christmas Eve – cooking the pork shoulder, baking the pumpkin pie, and placing the Christmas presents so carefully under the tree that they all are opened in the order that makes the event all-the-more exciting. But on Christmas Day, this B(itch) is off the clock. She’s enjoying a day to relax; a day when it’s quiet and she doesn’t have to go anywhere in particular or pretend to be something she’s not. She’ll probably stop by a local eatery that chooses to be open for lunch, because there are a lot of employees out there that actually volunteer those days because they need the extra pay. This year on Christmas, faithful blog followers, you should all take at least a minute to do what you want and to be grateful for the things others before us have done. And if Jesus ‘aint your thing, at least remember that Christmas could also just mean it’s time to get our heads out of our asses and be good people.

2 Replies to “Reasons the B(itch)’s a Grinch”