So I’ve decided, faithful blog followers, after this – our fourth installation of the Korean Hooker Hostage – I’m going to now have to go to a different nail salon and see if this is just normal behavior for these places.

Today was my biweekly appointment. I showed up and there were no other customers – it’s after the holiday season is over, so it makes sense that they were slow. Or … maybe people are catching on to the seediness of this place.

In any event, this morning I had forgotten to shave my legs (being married, pedicures are the only reason I do that…), so it was like a four foot shrub appeared the second my pant legs were rolled up. I apologized and my nail lady said something that was possibly the most wonderful thing anyone has ever said to me:

In my country, no one shaves their legs.

Then she pulled up her pant legs and showed me hers, which were hairier than any legs I have ever seen. Ever. I will probably never shave again now that I know this is another stupid American imposition on women. Feeling liberated, I sat down and smiled and almost forgot that I was supposed to be investigating the Korean Hooker Hostage situation again.

So I got through the majority of my pedicure with no incidences. I even read a magazine – something I rarely do (usually I bring a book). I learned about the new trend of Internet picture uploading – fridging (taking a photo of yourself sitting in your refrigerator … I know, I almost had a seizure at the thought of such stupidity too). Finally, I did remember my mission and looked around a little, but saw very few employees at all; and the storage closet in the back was closed (alluding either to another absence of the Korean Hooker Hostage, or her being locked in).

Toward the end of my pedicure, though, an older woman came in with her husband. She sat down for a manicure appointment and the husband sat down in the waiting area, opening a brown paper bag he had carried in with him.

To begin, he had no teeth. He had no teeth and was about seventy years old. Seventy years old with no teeth and gray hair, and a pot belly sticking out over his Wrangler jeans. This toothless, gray, overweight, elderly gentleman in Wrangler jeans proceeded to take out a variety of pretzels from that brown bag, one at a time, and licked them one by one. All seductively.

The first was a pretzel actually shaped in the pretzel fashion. Very slowly, he stuck his tongue through each of the holes – one by one. His shriveled, nasty, seventy year old tongue made its way through the snack until he was done with it, when he finally put the entire thing in his mouth and swallowed it. Whole.

The second was one of those long, stick pretzels, which the gentleman proceeded to perform fellatio on for no less than five minutes. At this point I figured that since he had no teeth, he probably had to soften the Rold Golds until they were swallowable, but still – what the hell with the seductive way of doing it? The guy looked like he might blow himself at any moment as he licked the stupid stick pretzel over and over and over again while his wife sat near me, seemingly unaware – gabbing about the fact that her single daughter is pregnant again at forty. Gee, lady… I wonder if it has anything to do with the fact that your husband can’t even eat a pretzel without turning it into something the Gay Sailor Brigade would be envious of.

I tried to get a snapshot of the elderly, toothless man in Wranglers having sexy-time with his pretzels, but it would have been far too obvious at the position I was sitting in relative to him. Lucky for you, though, faithful blog followers, when I got home I found we had some of those stick pretzels in the pantry. This, combined with the fact that I have absolutely no shame, produced the following three snapshots:

He began with about five minutes like this, same look of desperation

He then proceeded to mash the pretzel into the inside of his cheek, repeatedly with eyes closed. 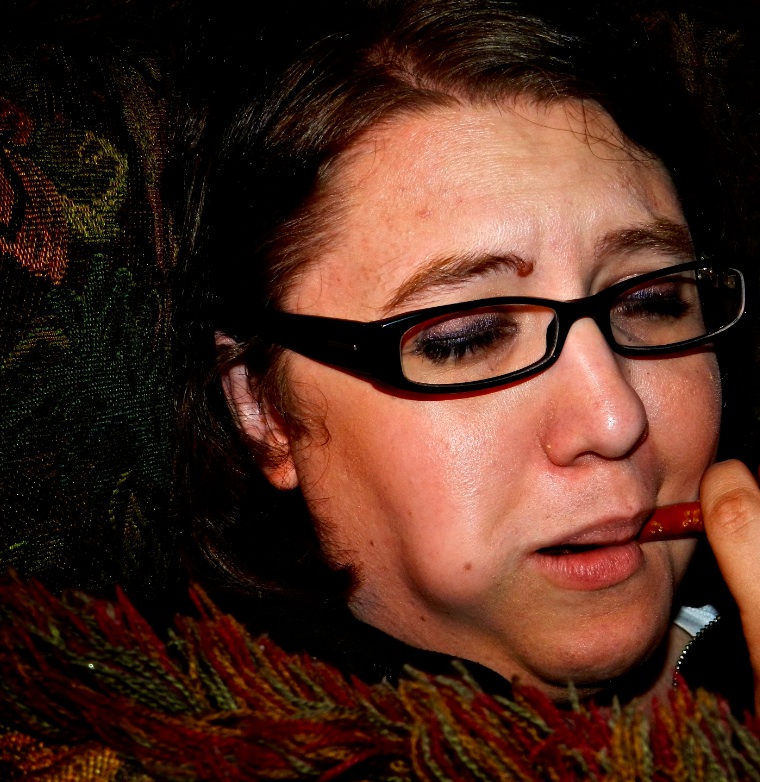 And then I left to miss the rest of the display. Now I am horrified, with pretzel crumbs all over my shirt.

So what’s next? Well, to review, my nail salon is a place of controversy and perversion. The place is so hyper-sexual and shady-seeming, I fully expect the police to come bursting in at any moment I am there. I am fairly certain there is a Korean Hooker Hostage being held captive in the storage closet, the owner’s husband is having some sort of affair with the lady that can deep throat a banana, the customers are perfectly OK with having anal massages in the pedicure chairs, and going for the big “O” (moaning included) in front of the entire place, and now even the bystanders in the waiting area are contributing to the controversy.

I, for one, will never stop going there until I witness some shit go down. But I have to find out if this is everywhere or just the one place I happened to select – of all the nail salons California had to offer.

13 thoughts on “Pretzels and Hairy Legs, Another Day With the Korean Hooker Hostage”